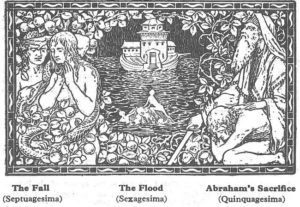 Every night, before going to sleep, the monks read a passage from St. Peter: be sober and watch: because your adversary the devil, as a roaring lion, goes about seeking whom he may devour: whom resist ye, strong in faith (1 Pet 5:8-9) and every morning during the year, the monks read a passage from St. Paul, Be watchful, stand firm in your faith, be courageous, be strong (1 Cor 16:13). The monk, then, is called to a continual vigilance. In fact, the ancient monks tried to follow this principle to the point of never even sleeping. As an older monk once said: “It’s enough for a true monk to sleep only one hour.”

Even if this extreme vigilance seems out of our reach, the monastic tradition has always placed it as a fundamental attitude. And all of us can understand this from the ordinary experience of everyday life. In being vigilant, it prepares us for something that might (or will) happen. For example, if someone must take a difficult math exam, he has many books to study. But this student is also married with two children and works as a bartender to earn extra money on the side. Before studying for the exam, he’ll need to create some space. He will ask for four weeks off from work, and he’ll need to find a room in his house where the children won’t be able to disturb him. And, once all of this preparation is completed, then he’ll be able to start studying.

The concept of preparing for Lent might seem absurd. Isn’t Lent itself a preparation for Easter? Wouldn’t this mean giving a somewhat exaggerated emphasis on corporal fasting and penance? Certainly, if we think of Lent always in negative terms, the time of Septuagesima will have a dark and somber character. But, if we look at the time of Lent, which will arrive in three weeks, as a time to listen and to grow in the love of God, then the three Sundays of Septuagesima will make more sense. If we look at Lent with the analogy of the exam, then God will be able to speak to and with us during Lent. Are we ready to listen?

Today’s Gospel presented for Septuagesima demonstrates the same point. The parable of Jesus turns human logic upside down. Five workers begin working at five different hours, and receive the same stipend. But the workers who worked the entire day were upset for what they considered a lack of justice. Wouldn’t we be upset, too, if a prostitute or a thief were to enter heaven before us? Are we prepared for this message? The gospel touches the heart of our Faith, that is, the gratuitousness of Redemption. It can’t be earned. Yet we’re still sleeping.

Today’s Gospel says that the workers began working at five different hours. In these different hours, we see the analogy for Septuagesima, Sexagesima, Quinquagesima, Lent, and in the end, the Holy Triduum itself. Certainly, all have been paid. It’s possible to wait. But if we don’t get prepared now, how do we know that afterward, or even later, we will get prepared? It’s always easier to say, “well, I just can’t do it this year. Maybe next year”. It’s important to remember the last phrase of the Gospel: for many are called, but few chosen (Mt 20:16).

If we want to experience real fruit during Lent, then we should pull out the weeds from our garden now, and take advantage of these three weeks. Lent will be short and maybe difficult. Let’s roll up our sleeves now, and prepare for Lent. Run whilst you have the light of life, that the darkness of death shall not overtake you (Jn 12:35) (Rule, Prologue)

[A homily given by a Benedictine monk of Norcia, Italy]