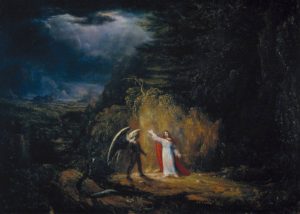 According to an ancient tradition, on the first Sunday of Lent we listen to the story about the temptation of Jesus in the desert. But we can ask ourselves, why do we begin Lent this way with the story of the temptations? According to the Curé of Ars, the reason for this is to show us that one of the purposes of Lent is to give us a time to combat evil more than we usually do. In a similar way, St. Benedict, in his Rule for monasteries, says that the entire life of the monk should be a sort of Lent, but because we don’t have the strength to do it , then it’s necessary to compensate for our carelessness during the rest of the year during the actual season of Lent.

But now, let’s analyze the Gospel passage in a more detailed way. Three temptations are presented. The Gospel describes the first temptation: “And when He had fasted forty days and forty nights, afterwards He was hungry. And the tempter coming said to Him: ‘If Thou be the Son of God, command that these stones be made bread’” (Mt 4:2-3). This temptation is easily understood. Jesus was hungry, and the devil wanted him to work a miracle to satisfy his hunger. In fact, in another place, Jesus performs the miracle of the multiplication of the loaves and of the fish, apparently to satisfy the crowd’s hunger. Thus, it might seem that there would be nothing wrong if he performed such a miracle for himself. But the devil wanted to lead Christ by his natural desire of food to abuse his power of performing miracles, that is, by performing a wonder without a proportionate reason.

The second temptation seems less understandable, and the thing which the devil suggests is worse. “If Thou be the Son of God, cast Thyself down” (Mt 4:6). The idea is that he will be miraculously saved, and this will show more clearly that He is the Son of God. It’s obvious, however, that there isn’t a true reason to do such a thing, and therefore the temptation makes even less sense.

The third temptation is even worse, even if the devil promises the greatest result. “All these”, that is all the kingdoms in the world, “will I give Thee, if falling down Thou wilt adore me” (Mt 4:9). The devil knows that there is no reason to adore him, and therefore he must offer everything in order to convince a person to do so. 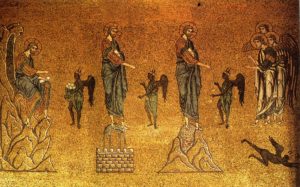 We can compare these temptations with the traditional good works of Lent, that is, fasting, prayer, and almsgiving. With fasting, we are able to curb the appetite for food, working against the first temptation. With prayer, we recognize our dependence on God, but without presumption, working against the second temptation. The relationship between almsgiving and the third temptation is perhaps less evident, but looking at almsgiving as a result of charity, which is the love of God, then we see that the thing which is most contrary to charity, and in this sense, to almsgiving, is precisely adoring the devil. In this way, from the temptations themselves we can understand the means to combat them, that is, with the works of prayer, fasting, and almsgiving.

And in conclusion, in today’s text we find another suggestion on how to live a fruitful Lent. Jesus responds to every temptation with a citation from Sacred Scripture. From this we can understand the importance that Sacred Scripture assumes in our personal conflict against temptation. We monks have Lectio Divina, and during Lent, we are called to dedicate ourselves even more fully to this practice. For other people, for example, for those who are not used to reading Sacred Scripture regularly, it would be a great idea to begin doing this during this season of Lent this year, maybe even reading for fifteen minutes a day, and thus find a way to help in the practice of virtue and in the struggle against temptation. At any rate, in all of our Lenten practices, let us ask for God’s help to persevere and bring them to completion.

Homily from a Benedictine monk in Norcia, Italy.