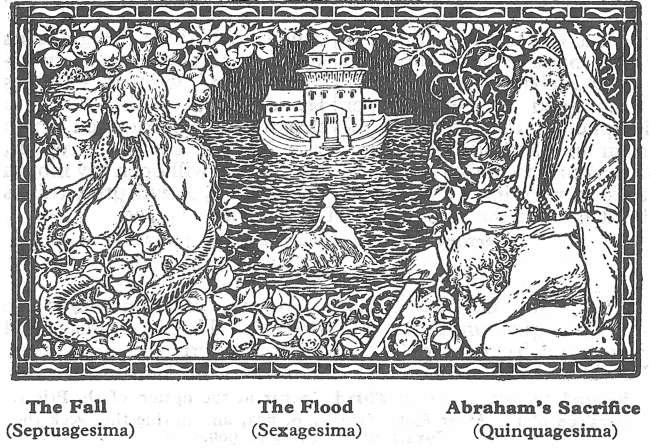 Because Easter Sunday is early this year, Lent comes early (starting on February 14th with Ash Wednesday), and thus the Season of Septuagesima begins oddly before the Feast of the Purification.  What is Septuagesima and why is it important?

Septuagesima and Lent are both times of penance, Septuagesima being a time of voluntary fasting in preparation for the obligatory Great Fast of Lent. The theme is the Babylonian exile, the “mortal coil” we must endure as we await the Heavenly Jerusalem. Sobriety and somberness reign liturgically; the Alleluia and Gloria are banished.

The Sundays of Septugesima are named for their distance away from Easter:

Quadragesima means “forty,” and this is the name of the first Sunday of Lent and the Latin name for the entire season of Lent.

Throughout this short Season of Septuagesima – and the next Season of Lent – you will notice a deepening sense of penance and somberness, culminating in Passiontide (the last two weeks of Lent), that will suddenly and joyously end at the Vigil of Easter on Holy Saturday when the alleluia returns and Christ’s Body is restored and glorified.