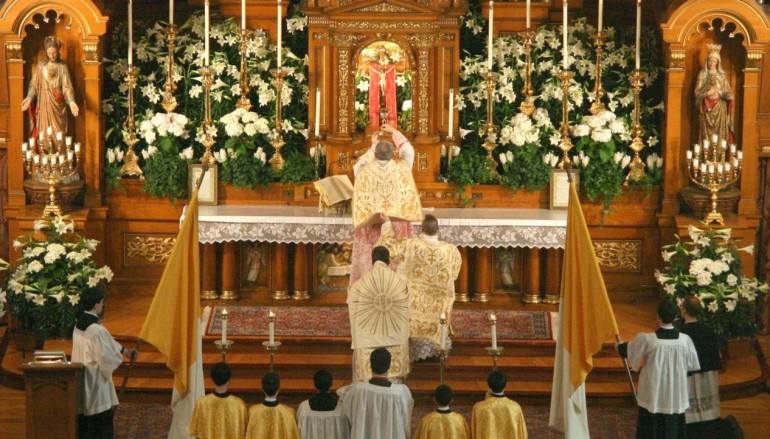 To Revel in the Beauty of the Church

To Revel in the Beauty of the Church
by Andy Milam

“The beauty of the Sacred Liturgy is given concrete expression by means of the objects and the gestures of which the person – a unity of soul and body – has need in order to be raised to the realities of faith which transcend the visible world. This means that sacred architecture and sacred art, including the sacred appointments, the vestments, the vessels and linens, must be of such a quality that they can express and communicate the beauty and the majesty of the liturgy as the action of Christ among us, uniting heaven and earth.”

His Eminence went on to say:

“According to the rationalistic thought which has strongly influenced contemporary western culture, beauty has been stripped of its metaphysical meaning. It has been ‘liberated’ from the order of being and has been reduced to an aesthetic experience or even to something sentimental. The disastrous consequences of this revolution are not limited to the world of art. Precisely because we have lost beauty, we have also lost goodness and truth.”

There is so much hope for the future of reform (restoration) of the Sacred Liturgy! Look at these quotes from a message sent to the conference by His Eminence Robert Card. Sarah, Prefect of the Congregation for Divine Worship and the Discipline of the Sacraments:

“When the Holy Father, Pope Francis, asked me to accept the ministry of Prefect of the Congregation for Divine Worship and Discipline of the Sacraments, I asked: ‘Your Holiness, how do you want me to exercise this ministry? What do you want me to do as Prefect of this Congregation?’ The Holy Father’s reply was clear. ‘I want you to continue to implement the liturgical reform of the Second Vatican Council,’ he said, ‘and I want you to continue the good work in the liturgy begun by Pope Benedict XVI.’” (emphasis added)

He then goes on to highlight two areas which he sees as of special importance.

“The first is by being utterly clear what Catholic liturgy is: it is the worship of Almighty God, the place where mankind encounters God alive and at work in His Church today. … The liturgy is not some social occasion where we come first, where what is important is that we express our identity.… The Church’s liturgy is given to us in tradition – it is not for us to make up the rites we celebrate, or to change them to suit ourselves or our own ideas beyond the legitimate options permitted by the liturgical books… ”

The second area is in the promotion of sound liturgical formation. The Council’s Constitution on the Sacred Liturgy went so far as to say that ‘it would be futile to entertain any hopes of realizing’ the liturgical renewal it desired ‘unless the pastors themselves … become thoroughly imbued with the spirit and power of the liturgy, and undertake to give instruction about it.’

The Mass is supposed to be a source of comfort and solace.  It is by the very power of the Holy Spirit that we come to understand what is really behind the liturgy.  Just as Christ exposed the Apostles to it on Holy Thursday and ratified it on Good Friday, we are able to witness that same truth, in an unbloody way, every time we assist at Mass.

I am optimistic, overall, because the mood in the year 2015 about liturgical renewal and its post-Vatican II success differs from that of the 1970s and ’80s. Thanks in no small part to the longstanding and well known views of Benedict XVI on liturgy, postconciliar liturgical reform has been reconfigured by a new theological and ecclesial climate. This signals some hope that the official “reform of the reform” may, in God’s good time, come to pass (even if it goes by another name or no name at all), thus ending a long period of tragic liturgical polarization.”

Fr. Kocik’s words are very poignant, as are the two cardinals.  The message is consistent and the message is clear, from the top down.  We must guard the sacred treasury of the liturgical action.  We must not give in to our emotions and our own whims, but rather we must do that which the Church asks of each of us.  “Art and Environment” as defined in 1978 is not what the Church intended.  No friends, the Church was clear in her message from Vatican Council II.  Do what the Church intends, not what the individual intends.  This is never more clear than in the paragraph from Sacrosanctum Concilium no. 22.

“Regulation of the sacred liturgy depends solely on the authority of the Church, that is, on the Apostolic See and, as laws may determine, on the bishop.

In virtue of power conceded by the law, the regulation of the liturgy within certain defined limits belongs also to various kinds of competent territorial bodies of bishops legitimately established.

Therefore no other person, even if he be a priest, may add, remove, or change anything in the liturgy on his own authority.”

The last sentence is the kingpin.  We don’t have the authority to innovate.  Do what the Church asks.  The Pope is the first legislator of the law of the Church, therefore, the reforms that Pope Emeritus Benedict enacted are in keeping with the authentic spirit of Vatican Council II.  And it is ratified by both Pope Francis and Cardinal Sarah.  Frivolous and unnecessary actions should be avoided and we should strive to return to the the notion of noble simplicity.  Holy Mass is not a place for experimentation or deviation from the norm.  We should revel in the beauty that the Church offers us, by her timeless treasure.

“A renewal of liturgical awareness, a liturgical reconciliation that again recognizes the unity of the history and that understands Vatican II, not as a breach, but as a stage of development: these things are urgently needed for the life of the Church.  I am convinced that the crisis in the Church that we are experiencing today is to a large extent due to the the disintegration of the liturgy, which at times has even come to be conceived of etsi Deus non daretur: in that it is a matter of indifference whether God or not God exists and whether or not He speaks to us and hears us.”

This is the mentality of today.  We do not live in 1970s and 80s any longer.  We live in a time in which we must not be influenced by the immediate reaction to the loosening of the liturgy, for as we see, this never was the case.  Then-Cardinal Ratzinger was ahead of his time, at odds with the proponents of “Art and Environment” and called for a renewal, not a reworking.

And that is the mentality with which we should approach Holy Mass.  Not an exaggerated sense of the surroundings, but a noble simplicity of form and function which extols the beauty of the Mass from all time.

Any other activity is purely ancillary to this primary purpose. That so many Catholics emphasize external actions — rather than interior union with the Eucharistic sacrifice — as the essence of participation, is in Benedict’s view a sign that “liturgical education today, of both priests and laity, is deficient to a deplorable extent.”  We must orient our minds and actions to God.  In doing so, we should look to that which is the most beautiful thing we can give, whether it be precious vestments, or beautiful vessels, or the most appropriate singing.

For as Benedict XVI taught in The Spirit of the Liturgy,

“The uniqueness of the eucharistic liturgy lies precisely in the fact that God himself is acting and that we are drawn into that action of God.”

Andy Milam is the Coordinator of Public Relations, Marketing, Fundraising and Tourism at the ‎Shrine of the Grotto of the Redemption, an active member of the Knights of Columbus, and the Liturgical Coordinator for Una Voce Des Moines.

Link between the Traditional Mass & Vocations?